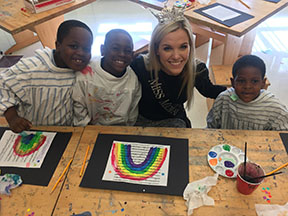 Do you have volunteer hours to use? Is your job looking for a team building experience? Check out our current volunteer opportunities here!

Thank you for your interest in making a donation to Art Road!

Clicking “Donate Now!” connects to Art Road’s PayPal Secure Server. You can use your PayPal account or your own Visa or MasterCard or Discover credit card.